This is an exciting time to be someone interested in spaceflight.  Not as exciting as the original space race, of course, but hopefully we'll get close within the coming decade.  SpaceX has been making a lot of news with its landings of the first stages of its rockets after using them and its big plans for future Mars missionsh and sending people around the moon.

The United Launch Alliance, which handles most of the government's launches and has a very good reliability record, also has some fairly ambitions plans it's announced involving the development of the space near Earth and it's next generation upper stage.  But probably the most exciting competitor to SpaceX right now (besides NASA) is Blue Origin.

SpaceX has its Falcon 9 which is launching satellites now and its more ambitious and out there ITS.  Blue Origin has until now had its New Shepard rocket for shuttling tourists up to space briefly but recently its been talking more about the New Glenn, a vehicle somewhere in ambition between SpaceX's existing and imagined rockets.  You can watch the video Blue put together about the New Glenn here.

This is a rather large rocket.  Not quite Saturn V large, as you can see here, but close. 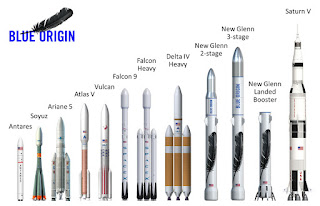 There are apparently two different configurations it can fly in, one with a third stage and one without.  The two stage version is the one they made the video of and which they provided some more details for recently.  It's not much taller than a Falcon 9 but is much thicker, at 7 meters in diameter to the Falcon 9's 3.7 meters.   The Falcon had to be long and thin in order for SpaceX to ship it by truck all the way from California, where they are made, to Florida where they are launched.  Blue Origin has invested in a big factory in Florida near their launch pad so that isn't as much of a concern for them.

There are still a number of unkowns for the 2 stage New Glenn but we know how large a payload it can send into low Earth orbit, 45 tons, and how much it send on its way toward geostationary orbit, 13 tons.  This compares with 22.8 and 8.3 tons for the Falcon 9.  It's interesting that the numbers are so far apart for the New Glenn compared to the Falcon 9 but there's a reason for that.

Remember from back when I blogged about rocket performance that the amount you can accelerate for a rocket is related to how much of the combined rocket/payload mass is fuel.  The New Glenn seems to have a fairly heavy rocket engine for its second stage.  That means that it can lift a heavy payload into orbit quickly before gravity has had time to cause too much in the way of a slowdown.  But it also means that the total non-payload mass of the second stage is higher so even if the payload goes down to something fairly small the engine and other weights will still prevent the overall mass ratio from getting too high.  Hence the stage will have a hard time getting a reasonable payload into higher energy orbits.

I suppose that has to do with the optional 3rd stage.  If you're going to have a third stage you want your second stage to burn it's fuel fairly quickly with a high power engine so that the third stage can get to its business.  I'd imagine that the adding the third stage would add a bit to the low Earth orbit payload of one of these rockets but would add far more to how much it can get into a GTO orbit.

The other big difference I noticed, besides sizes, between New Glenn and Falcon 9 was how the rockets are supposed to land.  SpaceX likes to land the Falcon 9 back on land when possible but also has a barge that floats out in the sea for the rocket to land on if the Falcon 9 doesn't have enough extra fuel after getting its payload to space to send itself all the way back to the pad it took off from.  SpaceX is clearly thinking about pad landings as what they want to do in the future in order to quickly refurbish the rocket and launch again.

For New Glenn landing at sea seems to be the idea with a return to the launch site being something that they're not really considering seriously.  You can see this in the ship that they're using.   Rather than cheap barge they seem, in the video, to be thinking about using a second-hand tanker with a big landing pad re-fitted onto the top.  The side-thrusters on a tanker aren't very powerful and so it would have to be moving forward to keep good control of its orientation to provide a stable landing site but overall it can give a much bigger target for the rocket to land on and in heavier seas too.  Also, it should be able to sail back to port much more quickly than SpaceX's barge can.  On the other hand it will probably be a lot more expensive to operate too.

So Blue Origin is investing in a bigger, more powerful ship to make landing at sea easier and SpaceX is mostly thinking about returning to land with sea landings something of an afterthought.  I suppose time will tell which is a better strategy.
at March 08, 2017