Rockets I: Some basics

I've been on a bit of a space propulsion kick recently between getting a copy of High Frontier, rediscovering Atomic Rockets, doing an archive binge on Selenian Boondocks, and generally following all the excitement around SpaceX.  I thought I'd write up a few blog posts on what I think of as the interesting bits.  Be warned that there'll be a bit of math involved but I'll try to keep it from getting out of hand.

So, lets say you want to go to space today.  Maybe you even want to head out to the Moon or Mars or Ceres.  When you travel on the Earth in a car or plane or boat the hard part is energy you spend is going to be in used to overcome the resistance of whatever medium you're traveling in.  You get up to some maximum speed and have to exert your motor constantly to stay at that speed.  When you want to stop you simply stop applying force and maybe apply a brake as well, neither of which require fuel.

Well, that would be how things would work if were out in the middle of perfectly empty space.  But as it turns out most of the interesting stuff near by is orbiting around other things like the Sun or the Earth and if you want to get to where you're going you have to worry about orbital mechanics.  I'm not going to get into those (if you want to learn more you should really try playing Kerbal Space Program) but the important point is that there's a minimum speed you need to be going to leave one orbit and go to a different one.  If you're in orbit around Earth at a height of 200 km and the place you want to go is also in orbit around Earth at 200 km then great, you can get there with a super short burn and patience.  But if you want to go to a different orbit then you need to change your velocity by a certain amount called a Δv.  Here's a handy chart that can tell you how big that amount is for various destinations you might want to go to. 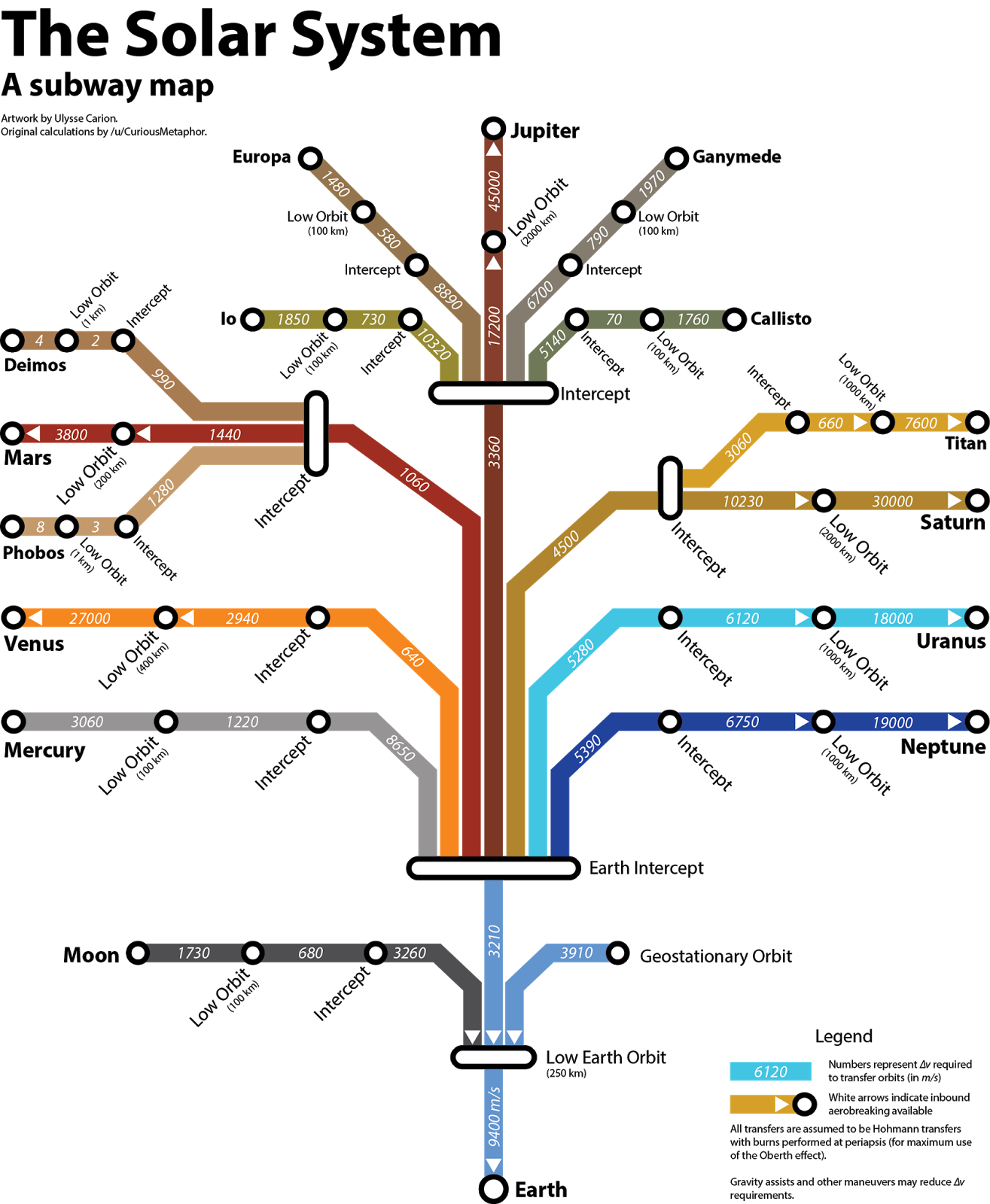 To travel rockets invariably expel propellant out their back and since for every action there is an equal and opposite reaction this accelerates the rocket forward.  How large a change in velocity a rocket achieves after a burn is governed by something called the rocket equation that follows.

Sadly there's another limit here that rears its head.  If you throw enough propellant to accelerate your rocket by a certain amount you've imparted a momentum of mpropellant * ve.  But the energy it takes to throw that propellant is going to be ½ mpropellant * ve2.  Divide one by the other and it turns out that for each bit of Δv you generate you have to pay energy proportional to your ve.  Or in other words the more mass efficient your rocket is the less energy efficient it is.
at March 21, 2015

Email ThisBlogThis!Share to TwitterShare to FacebookShare to Pinterest
Labels: Space

Ok, that's a somewhat provocative title but I think it's basically accurate.  During this pandemic the US in particular has had a pr...