Fusion is famously the technology that's always 20 years in the future.  And because of that I hadn't really seriously considered it as a realistic solution to climate change, sustainable energy, etc.  But recently I've become more optimistic about the prospects of fusion so I thought maybe I'd explain why I've changed my views.

What is fusion?  Well, it's a process that releases energy by combining elements together.  Atoms tend to resist this, so they have to be smashed together very hard in order for it to work.  In a thermonuclear bomb the fusion is triggered by a standard fission bomb going off to provide the needed energy.  Atomic weapons are rather hard to contain, though, and impractical to use as part of a power plant.  So for fusion we'd need to heat up some hydrogen very hot and keep it all together rather than expanding and escaping as very, very hot things like to do.

In the Sun our star's gravity is enough to keep everything together.  That works very nicely but sadly masses as large as the Sun play together with power plants every worse than atomic explosions do.  But gravity is widely regarded as the weakest of the fundamental forces for good reason and if it takes a impractical amount of gravity to keep some hot hydrogen contained it only huge but doable amount of electromagnetism to do the same thing.

Because the super hot hydrogen you want to use for fusion is constantly knock electrons off it's no longer a gas but an electrically active plasma and you can use a magnetic field to pin it in place.  For the temperatures needed not the sort of magnetic field that will fit on your desk but more one the size of a house.  Still, a lot more practical than atomic explosions or Sun sized masses.

It would be much easier if a reactor could be made smaller so that they could be build and modified quickly and cheaply.  But you need the magnetic field strength combined with its size to be enough to keep the super hot particles in place.  To be practical you need superconductors to make the magnetic field and those stop working if the magnetic field gets too strong.  Hence, with the maximum magnetic field our materials can sustain there's a minimum size.  Which has been expensively large.

Back in the mid 1970s the people running our fusion research program looked at the problems involved and figured that they'd need a lot of funding to iterate on building huge building sized reactors until all the bugs got worked out.  The came up with a set of set of plans for how quickly they thought they could get fusion working reliably depending on how big their budget for building trial house sized magnetic reactors was.  Here it is. 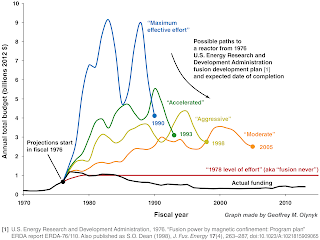 As you can see the level of funding eventually selected corresponds with enough money to pay a few scientists to think about the problem but with no giant house-sized magnets built to see if their ideas work, somewhat below what people in 1976 thought would never successfully create fusion.

Well, now in the 2000s the Europeans have gotten around to building a house sized magnet facility called ITER that, if funding keeps being poured in, should eventually get the kinks worked out.

But something really cool had happened since the 1970s.  This technology called Magnetic Resonance Imaging, MRI, has taken off the field of medicine letting us look into human bodies for diseases.  This is a huge business and a very practical and immediate one.  MRI machines want superconducting magnets handling intense fields and so lots of people have had very practical and immediate incentives to figure out how to create superconductors that can handle higher field strengths.  And so, they have.

A group at MIT came up with something they call the ARC reactor (groan) that uses a sort of superconductor that can handle fields almost twice strong as the superconductor used at ITER.  "Almost twice" might not sound like much but apparently the energy you can get out of a fusion reactor scales as the fourth power of the field strength and so there was scope to make the reactor as powerful as ITER in a tenth the volume.  And now they've formed a commercial company around this.

Just building the reactors isn't the end of the story.  There's a lot of engineering effort that has to go into dealing with issues like plasma instability, having the reactor materials deal with neutron damage, and so on.  But having reactors lets engineers and scientists try out solutions.  It's possible that one of these challenges might be insurmountable.  But there's no reason to believe that and if they aren't then we should expect to see practical fusion power, finally and actually, within 20 years.
at September 18, 2018