You might have heard of the famous self-photographing monkey shown below.  Well, there was a bit of a to do regarding who owns the copyright to the photo.  The person who owned the camera thinks he owns the copyright for some reason but there was also a group that went to court hoping to have the copyright assigned to monkey.  Well, it seems that as everybody expected monkeys can't own copyrights. 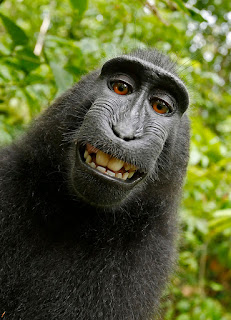 While I'm experimenting with putting images in blog posts here's a git of the heliocentric and geocentric models of the solar system.  You can see that the planets would have had to have moved in really weird ways in order to explain their apparent position.  On the other hand at the time of Galileo people had been adding so many corrective terms or epicycles to the geocentric model that it explained observations very well.  Kepler would eventually figure out that planets moved in ellipses but when heliocentrists thought that planets moved in circles the geocentric model gave better predictions.  I guess this is a lesson on the importance of Occam's Razor.

Here's a paper in Nature on efforts to control Malaria.  You can see a lot of progress in Figure 1.  That makes me very happy about my donations to the Against Malaria Foundation.

I've started following a piece of serial fiction called Unsong.  It's really good and reminds me of Terry Pratchett.  It's taking its chapter headings from a tumblr call King James Programming which is a bunch of utterances from a Markov chain generator that has been trained on the King James Bible and The Structure and Interpretation of Computer Programs.  It's also pretty funny all by itself.

Everybody talks about SpaceX's plans for Mars colonization.  The United Launch Alliance, their chief competitor in the US, has also recently put together a presentation on their vision for the future of Space: Cislunar 1000[video].  I think it's a much more realistic vision than SpaceX's, but then again SpaceX has better reusable rockets.

Self driving cars and their regulation are something I've written about.  There's been some good news on that front with the Deparment of Transportation trying to get together some national regulation for them.  Here's some explanation on the specifics on why it's a good idea.

There's a star out that that's been acting weird.  Some people blame aliens.

The company I work for, Right Hand Robotics, makes gripper hands people can use for their own robots.  Some people used one of our hands to create this system where they pick up a moving robot with their arm.

A different side of the Scopes trial than I had always heard about.

Our car's crash performance has come a long way in 50 years.

Bernie Sanders recently had an editorial in the NYT about what's wrong with the Fed and I actually agree with a lot of it.  I've written recently about the topic myself.  It would be nice to have a president making Fed appointments who believe in aggregate demand rather than being more of a real business cycle proponent like Obama (sorry I can't find a link where he goes into his views in more detail).  But I'm still not voting for him in the primary because we disagree on something I consider very important.
at February 01, 2016