- November 06, 2022
As I was making my coffee this morning I was idly speculating on if I would save energy by putting hot water from the faucet rather than cold into my electric kettle.  Now, first, it is written that " Every big counts ."  The energy in my morning coffee is probably below what I should be worrying about by a bit, if it wasn't fun.   That out of the way, if I use cold water then all the energy I use comes in as electricity from the grid which then gets turned into heat in the water with near perfect efficiency.  In Massachusetts I'm emitting about 421 grams of carbon per kWh on that. Or, lets say I use burning natural gas to heat my water directly.  That would typically be 185 g/kWh if I can do it perfectly efficiently.  If I was doing it on a stove top it wouldn't be that efficient but the boiler down in the basement should be about 95% efficient so lets say 195 g/kWh.  The water coming out of the tap isn't coffee making temperature but having part of the ener
Post a Comment
Read more

Infectious diseases are out of whack

- July 04, 2022
A little while ago I finished reading Plagues Upon the Earth: Disease and the Course of Human History .  It was a a very good book about exactly what it says on the tin.  There was a bunch of fascinating science in it but one part clarified some ideas I'd had noodling around in my head prompted by Covid and I'm going to outline those bits here. Back in prehistory there were very few epidemic diseases spread from human to human.  In a band of 100 people a disease like influenza will rip through everyone in short order.  But afterwards, everybody's immunity will be at a peak and that disease lineage would die out.  This isn't to say that humans would never get the flu, just that each outbreak would be the result of a new zoonosis or crossover from animals to humans.  Other diseases like Cholera exist harmlessly in the environment most of the time, attaching to the shells of crabs, until some human happens to drink it in and then it expands out of control with us as just
Post a Comment
Read more

On the hard problem of separating "normal" from "ok"

- May 31, 2022
A while ago I was listening to a podcast on the challenges of democracy and dealing with corruption and it brought up an issue I've seen a lot in a number of other contexts.  I thought I'd take a shot at summarizing all the different places I've seen this effect and some implications of it.  Rather than paraphrase I'll just quote from the transcript: you design messages that tell people, and often this is what happens, there's a lot of corruption, the corruption is a big problem, the corruption being a problem is hurting our development, it's hurting the economy, it's hurting jobs. We need to fight corruption. It's time for you to stand up.   What we found, which is consistent with previous studies that have been done in other parts of the world, is that the people who received the anti-corruption messages either had no effect, or they became more likely to pay the bribe in the game. This is actually a pretty typical example of a trap you can fall into
Post a Comment
Read more

- May 01, 2022
This is just a collection of some thoughts I've had about the recent conflict. Seeing it coming People had been worried about a Russian attack on Ukraine for a long time.  I'd worried that it was imminent a year ago with the last big massing of Russian troops on Ukraine's borders.  And with the massing this year I was more than just worried.  Going back to my predictions on  this Metaculus question  I was putting an invasion at even odds a month before the invasion but from the 13th of February until the invasion launched on the 23rd rapidly became convinced that the invasion was actually going to happen.  But while I can brag about being ahead of the curve in terms of predicting that there would be an invasion I was terribly wrong about how it would proceed and on the night of the 23rd I was afraid that the multiple axes of incursion and forward air drops would throw the defenses into confusion and rout.  Oops. Looking back at information from before the 23rd that still st
Post a Comment
Read more 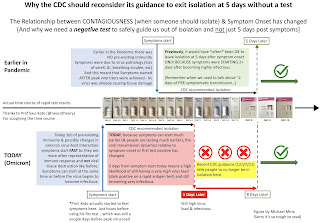 It's been a while since the last two posts on the topic so it seemed like a good idea to write down what I'd learned or changed my mind about recently on the topic. Immunity changes symptom timing One thing that's become important in the Omicron wave is that it seems that if you train your immune system to recognize a disease then you'll develop symptoms of that disease more quickly than if your body doesn't recognize it.  Most of the symptoms we tend to get when sick like inflammation or a fever aren't directly caused by the disease but by our body's innate immune system fighting it.  I'm actually not sure exactly why adaptive immunity leads to triggering innate immune responses faster but it's apparently a thing.  Michael Mina has a nice infographic here on the topic which is also arguing that this means waiting 5 days after symptom onset to return to work might now not be good enough when previously it would have been. Previously the one genuine
Post a Comment
Read more

- January 02, 2022
Another year has left us.  While we can never return to it we can learn from it.  And one way of learning is to read books!  This was a good year for reading for me in terms of book count at least but part of that was going through many excellent Penric and Desdemona novellas which don't take as much time.  I also don't think I read as many doorstoppers as normal though there were certainly some in there.  So 70 books total compared to my baseline of 50.  I'm going to list these by category with bolded ones being particularly good. History Arts and Minds: How the Royal Society of Arts Changed a Nation by Anton Howes Reaganland: America's Right Turn 1976-1980 by Rick Perlstein The Modern Defenses of the Coast of Maine, 1891 - 1945 by Joel W. Eastman The Great Leveler: Violence and the History of Inequality from the Stone Age to the Twenty-First Century by Walter Scheidel An Empire on the Edge: How Britain Came to Fight America by Nick Bunker The Enlightenment: The Pur
Post a Comment
Read more

Copenhagen ethics are a good way to avoid blame

- December 05, 2021
People often want to act in a moral way [Citation needed] .  People often also subscribe to ethical rules that in general help them to be more moral.  But that's not the only goal that ethics help people achieve.  One of the very first things I blogged about here was a variant of the trolley problem that seemed to show that avoiding blame seems to be just as much a part of how people approach ethical decisions as any abstract notion of the greater good. There's a tendency that people have, "affectionately" labeled the Copenhagen Interpretation of Ethics where if a person completely ignores a problem they usually won't receive any aprobrium at all but if they provide an inadequate amount of effort towards solving it they'll often get a ton of flack.  The person who doesn't get involved can just keep their head down and nobody will have any incentive to link them to the problem in the first place and if someone does that person is almost certainly equally
1 comment
Read more
More posts